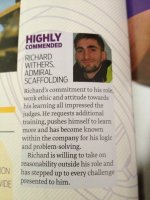 Admiral had a truly successful night at the CN Specialist Awards that took place at the Park Lane Hilton Last night. As Finalists in three categories, Access and Scaffolding, Training Excellence and Apprentice of the Year, we were already beaming with pride. We’d like to send out a huge congratulations to our Richard Withers who was highly commended for the Best Apprentice of the Year. What an achievement. The judges said “Richard’s commitment to his role, work ethic and attitude towards his learning all impressed the judges. He requests additional training, pushes himself to learn more and has become known in the company for his logic and problem solving. Richard is willing to take on reasonability outside his role and has stepped up to every challenge presented to him”. Well done Richard