With the completion of their 1st floor scaffold display in Oxford Street’s Topman The Admiral Structural Gallery are pleased to announce their arrival in the shop display market.

Under a contract to Prop Studios Ltd an artist’s design for the future display of clothing was turned into a scaffold structure. This structure received the seal of approval from the designer and The Group then had to set about the task of sourcing the correct material for the project. Once this had been achieved various elements of the material had to be taken to Prop Studios for them to be able to paint it in the correct colours for the co-ordination of the design. Using a team of 8 operatives, under the supervision of Steve O’Farrell, the complicated task of arranging all of the items of plant in exactly the correct position to achieve the designer’s effect started. The work itself took place over an entire night and most of the following morning to allow the minimum of disruption to an obviously busy top London store. 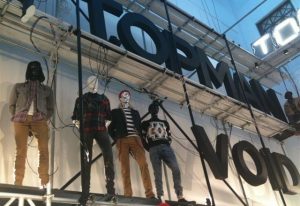 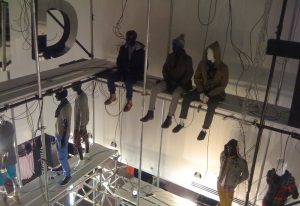 Your company provide scaffold at a fair price, is of good quality and an excellent service, and I would gladly use you again

I am very happy with your service and the guys who took down the scaffolding at Cavendish sq for me last weekend were a pleasure to work with. I will be using you guy in the future